For this analysis we used data publicly available by HESA.

We are only going to focus on UK Higher Education Institution (HEI) student enrollments in this analysis. According to the collected data and the following graph, HE Institutions in the UK have in the year 2015-2016 272000 less students enrolled compared to the year 2009-2010. That is a 10,66% decrease in student numbers.

Although we are only going to focus on what happened between the 2009-2016 period, it is worth having a look at how was the Higher Education system prior to the 2009-2016, as some decisions taken before may have influenced the number of student enrollments.

UK Higher Education system prior to 2009

In 2004 and under the Higher Education Act 2004, tuition fees caps can be raised and Universities in the England can charge up to GBP3000 \ annum starting from the academic year 2006-2007. This measure is introduced in Northern Ireland the same year, while Welsh Universities raise their tuition fees in accordance to the HE Act in 2007-2008.

Following the Browne review the tuition fees cap was raised and in December 2010 it was announced that the tuition fees are going to be raised starting from September 2012 from GBP3250 to GBP9000\ annum.

If you see the graph, the academic year 2011-2012 enrollments across the UK are decreased slightly, followed by a 6,88% drop in student enrollments the following year. By September 2014, universities in the UK have almost 300k less students enrolled compared to its pick in the year 2010-2011. Student enrollments only bounce back up slightly for the year 2015-2016 (+0,65%).

But let’s see what happened so far in each of the UK constituent parts. 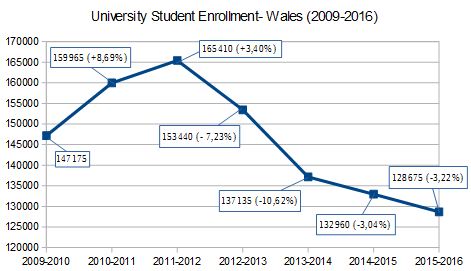 b) The raise of the tuition fees, which for students coming from the UK and the EU are currently the same as in English Universities -GBP 9000\ annum- and they intent to stay the same for the year 2017-2018.

One of the reasons that might explain the increase in enrollments is that the full time students from NI and the EU member countries pay GBP4030 \ annum for an undergraduate degree, while tuition fees for students from England, Wales and Scotland can be up to GBP 9000 per year. Again, as in Scotland, tuition fees in Wales are much lower for local and EU students respectively compared to the tuition fees in Universities in England.

On the 23rd of June 2016  EU membership referendum took place across the UK and the result shows that the UK is going to leave the EU  with any impact that that might have for EU student enrollments in UK Universities. The latest UCAS analysis regarding applications for the March deadline show a decrease in applications from the UK (-4%) and from the EU (-6%) compared to the March 2016 deadline.

Tuition fees in England are going to be raised again starting from September 2017 at GBP 9250 per year.

Only recently and during the June 2017 General Election, Labour party announced their intention to scrap University tuition fees if they win the General Elections starting from September 2018.

The next 2 years are certainly going to be very challenging and intense for the Higher Education Institutions across the UK. We just need to wait and see.

Thank you very much! You ‘ve been fantastic and I hope you enjoyed it!